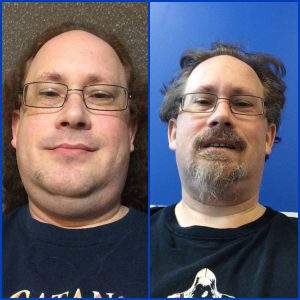 I met Craig back in June of 2016, where at 330lbs he  had the goal to lose over 100lbs. This is a guy who at one point was almost 400lbs, could barely walk around for longer that a few minutes with needing to rest, had very little self-confidence, severe type II diabetes and had to rely on many drugs to deal with all this.

I am super happy to have started with Craig, we started off getting him to move more in general and weight training twice per week. Over the course of the months, Craig not only was losing fat, but gaining muscle, cardio fitness, reducing the drugs & medications, reducing the signs of diabetes but also his confidence around people was increasing. Craig started working out more in his own time and making himself more accountable, which I couldn’t be happier with.

At the start of 2017, Craig weighs around 285lbs but I’m sure it won’t be long before he gets to 250lbs and beyond, it has been a pleasure for me and everyone else around to experience his changes.

We will keep you updated on this page but this is what he had to say:

“Now that i am down to lowest so far of 282.3 pounds i am feeling great. Not tired like i used to get and able to do so much more physically with out feeling pain and the such. I can now run and the such, as i was unable to do that at all due to the amount of wait i was carrying around. I also notice that mentally I am not as forgetful and my head does not feel so cloudy, the saying that your body and mind are connect is very true. Gain weight and if affects everything and you do not know what you have lost until you get it back.”

Best of luck Craig, keep up the hard work as we all know you are GOING to get to that 100lb mark!