Aether (pronounced aither) was thought to be the pure essence that the Greek gods breathed and was the substance that filled the space above the terrasphere.

Aether Brazilian Jiu Jitsu, was founded on the fundamental BJJ principle of understanding technique and leverage to control and submit larger opponents. We take pride in teaching pure technique in a safe and fun environment.

What is Brazilian Jiu Jitsu (BJJ)?

Brazilian Jiu Jitsu is a martial art, combat sport and self-defence system that focuses on grappling skills such as throws, takedowns and ground fighting. BJJ differs itself from other grappling disciplines by focusing on joint locks and chokeholds, instead of pinning or throwing opponents.

While BJJ is relatively informal compared to other martial arts, there is still a large focus on respect on the mats. Taking care of each other on the team is of the utmost importance. While on the mats, black belts are called “professor”, this is the Portuguese word for teacher. Whether the black belt is instructing, a student or simply visiting, it is customary to address them as such. Non-black belt coaches are simply called “coach”. Aether BJJ is very informal, but we do ask you respect any visiting black belts by referring the them as professor. 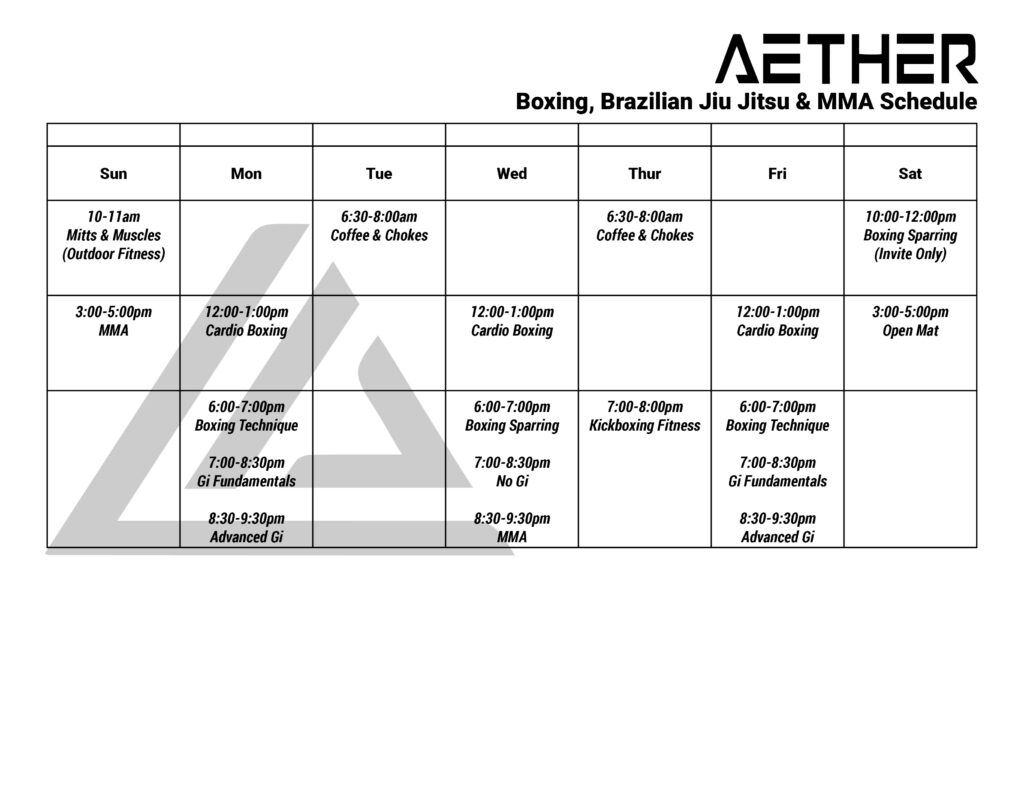 This class builds and reinforces the foundation of Brazilian Jiu Jitsu. Taught in the Gi (sometimes called “kimono”), the uniform itself can be used to control and submit your opponent. All levels are welcome.

No-Gi doesn’t have a specific uniform, although we recommend shorts and a rashguard (tight fitting top). Unlike Gi BJJ, using your opponent’s clothing to control or apply submissions is forbidden. Suitable for all levels.

Advanced Gi is designed to build upon the foundations set in the Beginner Gi class. Students will practice more situational concepts and practice drilling. Each class contains a minimum half hour of rolling.

No formal instruction. This class is simply a time for students to come and roll with one another and practice their techniques in a live setting. Students can decide before their round if they would like to roll in the gi or no-gi. The class is strictly rolling with a minimum round time of 8 minutes.

This class builds upon the techniques and concepts taught throughout the previous week. A drill is taught to simulate a combat situation. Perfect class to get a build muscle memory and to burn some calories.

Our Youth BJJ program is designed for kids to learn a new skill, build confidence, make friends and most importantly, have fun. Students will learn techniques and concepts and then test them at the end of class with positional sparring. Ages 5-14 (depending on size).